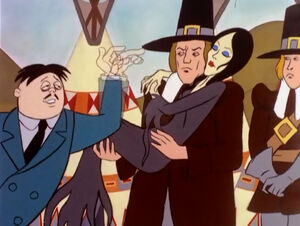 Van Dyke Addams is a relative of The Addams Family.

He was Gomez Addams' great-great-great-great-grandfather (though later he is given another 'great') who helped purchase Manhattan Island from the Indians. Gomez and Morticia found a statue of him in a display in New York's Museum of Natural History. He was bequeathed New York's Central Park as an inheritance by Chief Powhattan. 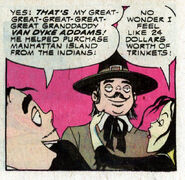 Add a photo to this gallery
Retrieved from "https://addamsfamily.fandom.com/wiki/Van_Dyke_Addams?oldid=19930"
Community content is available under CC-BY-SA unless otherwise noted.