Uncle Fester is a bald, hunched, and barrel-shaped man with dark, sunken eyes and often a deranged smile. He always wears a heavy, full-length fur coat. Fester was derived from a character drawn by cartoonist Charles Addams, although these were single page cartoons, with no story development or character names. The name "Fester" was chosen by Addams for the sitcom.

Uncle Fester is recognizable in a number of cartoons, both by his appearance and behavior, like turning the shower to a special "scalding" setting, feeding his garden plants on blood plasma, or releasing an eagle on the neighbor's homing pigeons. However, he is almost never in the same cartoons with the rest of the family, even for family celebrations like pouring boiling oil on carolers, though he was in one cartoon with the two children—going fishing with dynamite.

Uncle Fester has a strange ability to conduct electricity. He would often demonstrate this by putting a light bulb in his mouth, which would illuminate, accompanied by a loud, crackling noise (in the TV series the bulb's wire is sometimes clearly visible). He claims to possess 110 watts of power in one episode of the sitcom, while in another episode he demonstrated his "magnetic" quality by levitating a metal paperweight up to his hand. When struck directly on the head by a fired cannonball, he appears only mildly dazed, while the cannonball literally bounces off his head. In one drawing by Charles Addams, Morticia is shown growing flowers from his head.

He also often appears to suffer from a severe migraine that can only be relieved by putting his head in a screw press and tightening it to levels that normal people would not be able to withstand. Other times, he seems to do it for mere fun.

In the original 1960s sitcom, Uncle Fester is said to be Morticia Addams' maternal uncle, but in all other filmed and animated content he is Gomez Addams' older brother, making him uncle to Wednesday and Pugsley.

He is known as "Tío Lucas" in Spanish-speaking countries. In Brazil, he has two names: "Tio Chico" (original series and cartoon), and "Tio Funéreo" (movies).

In the 1960s television series, Uncle Fester (played by Jackie Coogan) is Morticia's uncle. In one episode, he became perplexed when asked his last name, suggesting that he has none or has somehow forgotten it. In several episodes, Uncle Fester refers to the Addams lineage as if it were his own, but the flashbacks in the episodes "Morticia's Romance, Parts 1 and 2," clearly establish him as Morticia's maternal uncle, being the brother of her mom, Granny Frump. In various episodes, he was a partner in typical sitcom schemes with Gomez, Morticia, or Grandmama, indicating no real preference for any family member over others.

Uncle Fester's known ancestry dates back to his great-grandfather, Blob (not to be confused with Gomez's Cousin Blob, a two-headed ghost), who received the gift of a sacred ruby after he had pried it from the head of a Hindu (whom it was giving a terrible headache). The ruby remained in the family until Fester unthinkingly used his slingshot to hurl it at a yowling stray cat. "It was the only rock in the house!" he said in his defense.

Per the 1960s sitcom, little is known of Uncle Fester's childhood, save that his father (Grandpa Droop, Morticia's maternal grandfather) was an excruciatingly strict man who severely disciplined him, paddling him even when he was good and paying him to stay out of public (Uncle Fester considered this to be experience in "public relations"). He refused to allow Fester to even touch a battleaxe (a treasured toy among people with the Addamses' macabre tastes) until he was eight. As an adult, Uncle Fester defended his father's strictness, pointing to his own character as proof of its effectiveness: "I didn't become what I am by accident! I had upbringing like no other!"

Uncle Fester has also offered contradictory information about his educational background. In the sitcom's first episode, he notes that he never went to school ("And look how well I turned out!"), but he later claims to have failed recess three times. After becoming an adult, Uncle Fester took correspondence courses in various subjects and his educational endeavors occasionally formed an episode's main plot. It may be from one such course that he obtained his fraternity paddle, which he once threatened to use on Wednesday in imitation of his father's punishment style; however, like many an uncle, Uncle Fester proved to have more bark than bite in dealing with the children. When he suspects someone of maligning, cheating, or otherwise mistreating anyone in the family, Uncle Fester is ever ready with his blunderbuss "Genevieve", eager to "shoot 'em in the back!" However, he is far less eager in meeting a malefactor in a face-to-face duel; he was briefly enthusiastic about a pistol duel with a enemy until he asked, somewhat timidly, "Does he get one too? Loaded?"

Another prized possession was his cannon, "Old Reliable", which he normally kept in his bedroom. Uncle Fester maintained a treehouse in the Addamses' yard and frequently retreated to his closet to think. After receiving the gift of a motorcycle in the episode "The Addams Family Meets a Beatnik", Fester often drove it through the living room, inevitably crashing in the conservatory (Several episodes used identical footage of this scenario.). Uncle Fester also collects three-dollar bills.

The 1998 live-action series continues the later tradition of having Uncle Fester (played by Michael Roberds) as Gomez's biological brother, yet between this version and the 1960s series this is the only visible difference.

In the first animated series by Hanna-Barbera, Jackie Coogan reprised his role as Uncle Fester. In the second animated series by Hanna-Barbera, Uncle Fester was voiced by Rip Taylor. In this series, Uncle Fester is perhaps the most loving of self-inflicted injury. He would allow other members, usually Lurch, to harm him anyway they can, but his greatest fondness was blowing himself up. Uncle Fester and Granny don't get along. As a running gag, Uncle Fester would never believe Granny Frump's predictions until she predicts something that causes him great harm, or in his case, great joy. Uncle Fester also is very fond of the Addamses' next door neighbor, Norman Normanmeyer, a boring person controlling an underwear empire, who hates the Addams family for their strangeness and on an occasion, Uncle Fester comes on a visit Norman's family through the sewer pipes. Uncle Fester seems quite oblivious to the matter that Norman hates him and, possibly due to the Addams family nature, thinks that all the angry, aggressive outbreaks are a sign of sympathy. Uncle Fester also has a self-made comic books, called "Festerman", a gothic hero with a weakness to chimneys, who gives his flying cape to enemies upon request so as to fall and would bring villains to their knees and simply by enjoying all the harm they would give him to the point of wearing them out. During this series, he is given a musical-type episode about the "Fester Way", his own, strange way of life.

In the 1991 movie, The Addams Family, Uncle Fester (played by Christopher Lloyd) is the long-lost big brother of Gomez Addams. He was believed to have been lost in the Bermuda Triangle for twenty-five years. A grifter named Abigail Craven (Elizabeth Wilson) conspires to steal the Addams fortune using her son, Gordon, who displays an eerie resemblance to the missing Uncle Fester. On the night that the Addamses hold a seance to contact Uncle Fester's spirit, Gordon shows up at their door, posing as Uncle Fester. Although he is baffled and horrified by the Addamses at first, Gordon begins to take a liking to the family and their eccentric ways. In the end, he disobeys his mother and helps Gomez and his family get their house back. It is later discovered that Gordon Craven is actually Uncle Fester, and that Abigail found him after his accident in the Bermuda Triangle, suffering from amnesia.

In Gomez's home movies from their childhood, Uncle Fester is hairless as a child (although, as Gordon Craven, he is seen shaving his head). At the end of the movie, it is revealed that Uncle Fester acquires his ability to conduct electricity after being electrocuted by lightning.

In a 2012 interview, Barry Sonnenfeld, the director of the Addams Family movie, stated that he originally intended that it be unclear whether Fester really was an impostor or not, but all the other actors rebelled and chose ten-year-old Christina Ricci to speak on their behalf, who "gave this really impassioned plea that Fester shouldn't be an impostor.... so we ended up totally changing that plot point to make the actors happy. And they were right; it was the better way to go."

Fester also appears in the film's sequel (again played by Lloyd), Addams Family Values. This film centers around Uncle Fester's marriage to Debbie, the recently hired nanny who wishes to murder Uncle Fester and inherit his share of the Addams fortune.

Fester again appears in the direct-to-video film Addams Family Reunion, here played by Patrick Thomas. He is portrayed as a mad scientist reminiscent of old Grade-B horror films. He creates a dog named "Butcher" as a birthday present for Pugsley a dog that mutates into a hair-devouring brute whenever someone says "good boy." At the end, Butcher attacks Cousin Itt who is, understandably, quite nervous around him.

The role of Uncle Fester is considered a supporting role in the 2010 Broadway production of The Addams Family: A New Musical. The role was originated by Kevin Chamberlin. He acts as the narrator and helps Wednesday find love because he won't let their ghostly ancestors go back to their graves until love prevails.

The 2019 animated film opens with Morticia on her wedding night to Gomez Addams, and Uncle Fester is one of many members of the Addams family to be in attendance. However, the ceremony is ruined by an angry mob of people who see the Addams family as freaks. Grandmama buys Uncle Fester time to evacuate Gomez, Morticia and Thing.

Thirteen years later, he is called in early by Gomez to help a struggling Pugsley with the complicated traditions and pressure of his Caber Mazurka. He is the constant target of his nephew's explosives.

Later, when Margaux has been exposed for what she really is, and her show is taken off the air, she wonders who will buy all the houses; Fester comes up with a compromise to Margaux, telling her that he has an idea for how to get rid of the houses; she has a lot of houses to get rid of, and he has a lot of family members he needs to get rid of. Eventually, the two work together, while the crowd that Margaux called on to demolish the Addams mansion decides to help rebuild it; he becomes Margaux's business partner, selling homes to the other members of the Addams clan. He is amongst the many members of the Addams family to be present when Pugsley finally completes his Mazurka in his own style.

Fester's underwear has yellow rubber ducks on it at Gomez and Morticia's wedding after it got ruined.

Fester has a flashback of juggling newborns in a hospital's nursery, including Wednesday. It was on a Tuesday.

His underwear has black spiders on it.

In the original series 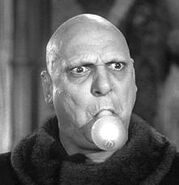 In the original series 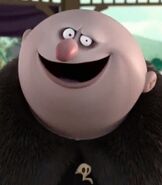