Addams Family Wiki
Register
Don't have an account?
Sign In
Advertisement
in: Merchandise, A to Z Index

The Addams Family View-Master reels are picture reels produced by Sawyer's in 1965 for their View-Master viewers.

Each View-Master reel contains seven pairs of pictures that, when used with a viewer, allow seven stereoscopic "3-D" to be seen.

This set of three reels shows color scenes from The Addams Family original television series episode "Portrait of Gomez". It also includes a sixteen-page illustrated storybook which tells the story of the episode. 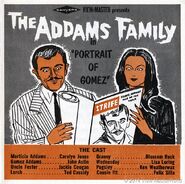