Addams Family Wiki
Register
Don't have an account?
Sign In
Advertisement
in: Places, A to Z Index

The Addams family's mansion has had many different incarnations over the years. It made its first appearance, at least, the interior did, at the same time as Morticia and Lurch, in one of Charles Addams' cartoons. The house was depicted as a dilapidated mansion that had been condemned and was seemingly haunted, due to the strange creatures at the top of the staircase. Since then, it had become almost a character itself, and served as the main setting for the rest of the cartoons featuring the Addams family. Stories surrounding the mansion are common in video games, primarily, and the house's origins and specific nature are explored more deeply in The New Addams Family than any other incarnation.

In the original series, the house was given the address 0001 Cemetery Lane. Its design was also changed somewhat. Instead of being a dilapidated house, it was now practically a museum filled with odd statues, trophies, and other interesting things. The house also sported a Play Room with medieval racks, nailbeds, iron maidens, and stockades for "relaxing."

The house once again became a condemned mansion in the New Scooby-Doo Movies TV show, in which the Addamses made a guest appearance. In the following series, the Addamses bought a recreational vehicle which resembled their mansion and drove it around the country. In the Halloween special, an entirely different mansion is shown.

In the 2019 adaptation, the mansion is a former mental asylum located on a hill in the outskirts of New Jersey which also houses a disembodied resident who wants the place to remain undisturbed.

The New Addams Family provided a cross between the original TV show's mansion and the movie/comic strip's mansion. The mansion remained a condemned building (According to Morticia, it had actually been condemned five times), and the interior had various dangerous objects and odd statues just like the original TV show. The entrance gate (nicknamed, appropriately, "Gate" in the original TV show and the 1991 film) was now overgrown with foliage. A cemetery was moved next to the house (a change that also occurred in the two feature films and the 1977 reunion special), and there were now various secret rooms and passages. The mailbox and door knockers seem to be alive. When Gomez and Morticia first moved in as the home's owners (though Gomez and Grandmama had been residents even before then), they thought it was haunted. They regret that it wasn't, "but you can't have everything." But the existence of the ghost of Aunt Minerva proves otherwise (though she may have "moved in" just recently). It's also mentioned that the home is made of titanium instead of wood (and is consequently bomb-proof),[1] has 26 (or maybe 27) rooms -- if Fester has made a new addition with his cannon[2] -- and the house has apparently been in the family for centuries. The area surrounding the house can be described briefly as a wasteland, with swamps, a moat, and the like. The address was also changed to 1313 Cemetery Lane, perhaps in a reference to 1313 Mockingbird Lane, the home of The Munsters.

The interior of the house seems to be disproportionately bigger than the outside view suggests. Many runaway guests become completely lost in what seem to be dozens of rooms, hallways and staircases. The house is also filled with deathtraps carefully or carelessly positioned by Fester or Wednesday, deadly beasts, deadly plants, booby traps, explosives and whatnot.

In the stage musical, the mansion was moved to two acres in Central Park, New York City. These two acres had been in the family since they were deeded to Gomez' ancestor Alfonso the Enormous for services rendered to Queen Isabella of Spain.

The Rooms and places

There are somewhere between 25 and 30 rooms in the Addams Family Mansion. There are other rooms that are not always displayed/featured.

Other rooms, such as the bathroom(s) and the hallways.

Outside, but still on the property are:

* Note:In the original series, the Dining Room, the Study, and Gomez' Office, are three adjoining walls of one set, so parts of each can sometimes be seen in scenes set in these rooms.

The house in The New Addams Family TV Series

A bigger view of the living room 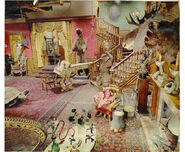