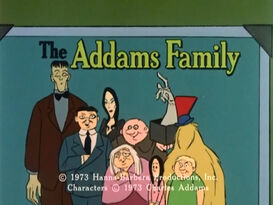 Lost for three weeks in the wide open spaces of the West, The Addams Family stop at the I.O.U. Ranch, where they are mistaken for rustlers from Tombstone hired by the Double Cross U Ranch. Badmouth Ben wants to force the Major to sell the I.O.U., so he's been rustling the cattle and running off the help. When the Major explains, Uncle Fester volunteers the family's help. Even Ali, Ocho and Kitty Kat pitch in. Badmouth Ben hires the Hole in the Head Gang, Wyatt Burp, Silly The Kid, and Wild Bill Hiccup, to get rid of them.

Retrieved from "https://addamsfamily.fandom.com/wiki/The_Addams_Family_Goes_West?oldid=19829"
Community content is available under CC-BY-SA unless otherwise noted.