Tully Alford has taken control of The Addams Family Mansion and imprisoned Morticia, Pugsley, Wednesday, Grandmama and Uncle Fester. The player controls Gomez Addams as he attempts to save them. They have been stowed away in various locations in the mansion and are protected by a boss of some sort. Thing provides hints on gameplay.

Gomez starts outside the mansion, but once inside, can move from level to level in any order. The mansion is full of secrets, hidden passageways and side levels and bosses. Gomez dispatches enemies by simply jumping on their heads. He can also throw found objects at them.

The game did not have a save system, but instead bore a password system. Completion of various stages would reveal passwords, enabling the player to resume where they left off. 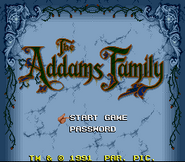 Retrieved from "https://addamsfamily.fandom.com/wiki/The_Addams_Family_(video_game)?oldid=21990"
Community content is available under CC-BY-SA unless otherwise noted.