Addams Family Wiki
Register
Don't have an account?
Sign In
Advertisement
in: Games, A to Z Index

The Addams Family is a pinball game by Midway.

Released under the Bally Technologies label in 1992, it is the best-selling pinball game of all time.[1] It features The Addams Family characters and uses sound bites from the 1991 feature film.

Interestingly, it does not play the theme song from the film, but plays several variations on The Addams Family: Main Theme, and automatically flips the flippers in place of the original characters' snapping.

All of the main characters appear on the backboard, and all but Granny Frump also appear on the table. Thing actually appears twice on the table; he is painted on the scene near the middle, and he is a mechanical hand that pops out of the table to (magnetically) grab the ball for multiball play. The table also features Trainwrecks, and Bruno. Painted on the table, though not referenced in the game, are Marie Antoinette, Wednesday's book about the Bermuda Triangle, the family Credo, and the gravestones of Cousin Fledge and Muerto. Thing and Cousin It also appear periodically on the LCD scoring display.

The main goal of the game is to tour the mansion. Among the objectives to accomplish this are the Mamushka, Raise the Dead, the Tunnel Hunt, and Hit Cousin It. Performing trainwrecks and bear kicks scores extra points.

In the match animation for a free game, the "Thing", who drags a wagon filled with various numbers, slams into a bumper as the two numbers (at least one ends in zero) fall out of the wagon to determine whether or not the player matches the last two digits. 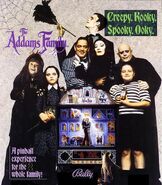