Addams Family Wiki
Register
Don't have an account?
Sign In
Advertisement
in: Music, A to Z Index

View source
watch 01:54
Obi-Wan Finale - The Loop
Do you like this video?
Play Sound 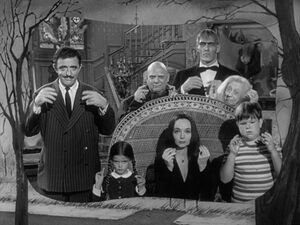 The Main Theme of The Addams Family original television series was written and performed by Vic Mizzy. In the show's opening, The Addams Family are shown nearly motionless except for their snapping in time with the music.

In addition to the finger-snapping and harpsichord accompaniment, actor Ted Cassidy punctuated the lyrics in his "Lurch" voice with the words "neat", "sweet", and "petite."

Mizzy's theme was released as a 45rpm single, but failed to make the national charts.

The song was reworked for the 1977 Halloween special. A few notes of it introduced the 1991 feature film, and strains are heard throughout the sequel, Addams Family Values. Lurch played it on the violin in Addams Family Reunion and on the piano in The New Addams Family episode "Lurch and His Piano".

It was reused in 2008 for a series of "Addams Family" television commercials for M&M's Dark Chocolate candies. In a cross-promotion with The Addams Family 2, Progressive Insurance put its own lyrics to the instrumentals. 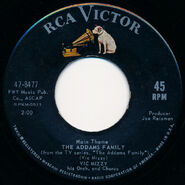 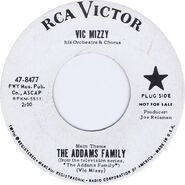