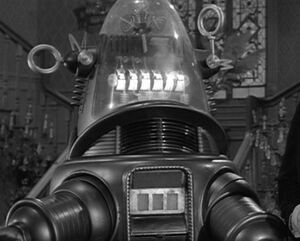 Smiley is a robot built by Gomez, Uncle Fester and Pugsley.

When Morticia thought they were overworking Lurch, Gomez decided to build him an assistant. He, Fester and Pugsley assembled him in the Play Room. He did his job too well in some areas, but not well enough in others. Eventually, a jealous Lurch did away with him.

Giving Fester a Wax Job
Add a photo to this gallery

Retrieved from "https://addamsfamily.fandom.com/wiki/Smiley?oldid=22274"
Community content is available under CC-BY-SA unless otherwise noted.