Granny tells a tale of a Halloween forty years ago. A man went golfing on Halloween night, and was struck by lightning, which lost him his head. He took the huge golf ball from the course sign and returned as the Puttergeist. Wednesday and Pugsley are not impressed with the story, having heard it too many times. They go trick-or-treating with Thing and N.J. Normanmeyer. When Wednesday uncovers Uncle Fester in a Puttergeist costume, it reinforces her belief that the Puttergeist does not exist. So when the real Puttergeist shows up, attempting to scare and capture the group, she is not scared. After a golf cart chase, it is revealed that Norman Normanmeyer is the Puttergeist. He explains that the myth was started by his grandfather, and his father and he continued it, all three posing as the Puttergeist over the years. N.J. is initially upset that Puttergeist is not real, but he appreciates that his father continued the act for so long, just to please him. Moments later, the real Puttergeist drives along, confirming his existence. 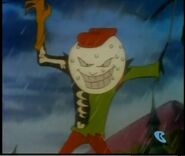 Puttergeist Wheelie
Add a photo to this gallery

Retrieved from "https://addamsfamily.fandom.com/wiki/Puttergeist?oldid=23142"
Community content is available under CC-BY-SA unless otherwise noted.