Pubert is a child of Gomez and Morticia Addams.

Pubert is a mustachioed baby who seems to escape certain death through random chance a number of times. He occasionally shoots flaming arrows though he is never seen with a bow.

His parents also considered naming him Lucifer, Benito, or Mao.

After his birth, once he is brought home and calmed by the stuffed bear and knife mobile, his life is threatened several times by his siblings Wednesday and Pugsley, who fear that he is the replacement for one of them. He manages to evade their attempts, mostly through luck- although once he managed to stop a guillotine all on his own.

Debbie Jellinsky is later hired as a nanny, and while she rescues Pubert from his siblings' murder attempts, she leashes him to the desk while she searches through Fester's stuff, and refers to him as a brat.

During Debbie and Fester's wedding, he apparently had "too much fun at the reception."

After Fester leaves the Family and Wednesday smiles, Pubert becomes Normal for a while, turning blonde and smiley. His family is horrified, and Morticia is upset as his choice of literature- The Cat in the Hat.

Once the Family is back together, Pubert returns to normal, and sneaks out of his crib using the Knife Cradle. He is shot into the air by a bowling ball and falls into the basement, where Debbie is attempting to electrocute his family. He connects two cords, which electrocutes her instead.

After his first birthday party, he is never seen again.

References to Pubert may be made in the 1998 straight-to-video film Addams Family Reunion and The New Addams Family, in which Wednesday states that there used to be a third sibling, but that Pugsley ate him. 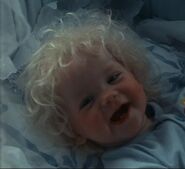 The YouTube channel Achievement Hunter which consists of five key members display a comical debate about the existence of Pubert. On the episode labelled "Let's Play Minecraft - Episode 83 - Geoff's House Part 2", Gavin Free argues that Pubert was a character on the Addams family. This is met with intense laughter in which one of the members completely bewildered by what he and the other three members believe to be extreme stupidity on Gavin's part states "I feel safe in saying, there has never in the history of man, has there been child named Pubert, I don't even think there has ever been a fictional character named Pubert". After being mocked several times he is coaxed in researching this "made up" Pubert and upon finding this page discovers that Pubert was in fact a real character leaving the entire AH crew speechless that Gavin was right, and granting him slightly more respect... at least until he next opened his mouth.

Retrieved from "https://addamsfamily.fandom.com/wiki/Pubert_Addams?oldid=22725"
Community content is available under CC-BY-SA unless otherwise noted.