Addams Family Wiki
Register
Don't have an account?
Sign In
Advertisement
in: Characters, Female Characters, A to Z Index

Parker Needler is the neglected and depressed daughter of Margaux Needler.

The opposite of her mother, Parker is more open-minded, and has a liking for when things are different.

Having no actual friends aside from Layla and Kayla, Parker spends all her time blogging on her phone. She meets Wednesday Addams, who is equally disappointed with her life, which leads to them forming a bond with each other. Parker thinks of Wednesday being weird at first, but once she thinks about it, she begins to like her and decides to think of Wednesday amazing. With Wednesday's help, Parker finds her true self as a Goth instead of a pretend "peppy" girl in bright colors, much to the shock of Margaux, but obviously thinks her new look is weird, figuring that the idea came from Wednesday.

When Margaux tells Parker to come with her, Parker refuses to go anywhere with her mom, and makes it clear that she is staying with her friend Wednesday. When Margaux tries to get her daughter to change her mind by saying that the Addams family are freaks, Parker replies, "If they're freaks, then I'm a freak," before informing the townspeople that they are all freaks as well. Parker and Wednesday reveal that Margaux has put hidden cameras in everyone's houses and has been watching them all the time. Due to Parker livestreaming her mom's rant, the network cancels Margaux's show. 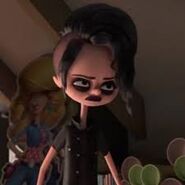 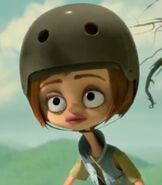 Parker was voiced by Elsie Fisher.