Ophelia Frump is the cheery, happy and athletic sister of Morticia Addams.

Except for looking identical, she is nothing like her younger sister, as she is closer to being "normal" because she likes to cook normal food, and is often very cheery and upbeat. However, she is a bit moody and can be quite gloomy when sad. She once almost married her brother-in-law, a very reluctant Gomez Addams, when he was promised to marry her in an arranged marriage, which seems to be a tradition in the Addams Family. She then fell for Cousin Itt and left Gomez to Morticia. She is very close with her mother Hester.

In The New Addams Family, she seems to be a bit mean to Morticia, unlike how she was in the original series.

Ophelia tends to Judo-flip people, but they don't like it, leading several men to break up with her. She is also a bit clumsy, breaking a lot of items, and, like Uncle Fester, she can slide up the Fireman's Pole. Plants also grow on her head. 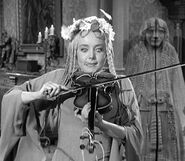 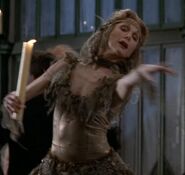 Retrieved from "https://addamsfamily.fandom.com/wiki/Ophelia_Frump?oldid=23113"
Community content is available under CC-BY-SA unless otherwise noted.