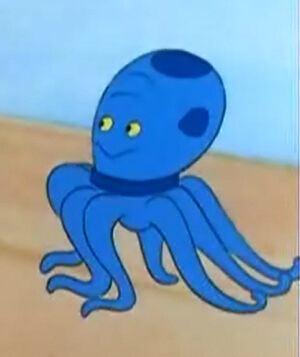 Ocho is The Addams Family's pet octopus in the 1973 animated series, and in the Gold Key comics based on this series.

Ocho is a blue octopus who travels around the country with the Addamses in their mansion-shaped RV. Unlike Aristotle, who always remained at least partially in his aquarium, Ocho frequently walks on the ground with his tentacles.

Ali the alligator once helped him beat Lurch at checkers.[1]

Ocho appears in all sixteen episodes of this series.

Left in the Lurch

The Addams Family at Sea

The Addams Family at the Kentucky Derby