Morticia A Addams (née Frump) is the fictional matriarch of The Addams Family, created by cartoonist Charles Addams. Charles Addams gave her the name "Morticia", implying "death" or "mortician".

Morticia is the wife of Gomez Addams, and the mother of Wednesday, Pugsley, Wednesday Jr., Pugsley Jr. and Pubert. She is also the sister of the daisy-headed Ophelia Frump and daughter of Granny Frump and Grandpa Frump.

She has pale skin and long black hair. She commonly wears black Gothic dresses to match her hair, tightly form fitting, with a hobble skirt.

In the original television series Morticia was portrayed by Carolyn Jones.

According to Wednesday, Morticia applies baking powder to her face instead of actual makeup. In each episode, she easily allures her husband Gomez by speaking French (or any other foreign language for that matter). Morticia is musically-inclined, and is often seen freely strumming a shamisen. She frequently enjoys cutting the buds off of roses which she discards, keeping only the stems. She also has a carnivorous plant, an African Strangler named Cleopatra, which she enjoys feeding. Morticia also has an affinity for making certain that her family upholds the traditional Addams way, and is usually the most taken aback when one of the clan goes astray and does something "pleasant."

In the first animated series made in 1973, Morticia was voiced by Janet Waldo.

Morticia was played by Anjelica Huston in The Addams Family (1991) and its sequel Addams Family Values (1993). Huston's portrayal of Morticia was always illuminated by a ghostly glow around the eyes, which became most noticeable when she was standing or lying in dim light.

In the movie, she is soft-spoken, seductive, warm and loving to her family. She is the one who consoles Gomez when he is at his lowest and proves her fierce loyalty to her family when she goes to confront Fester when he kicks the family out of their manor. During a job interview, after the entire Addams family was evicted from their house due to Abigail Craven's scheme, she revealed that she studied under a private tutor and claimed that her specialty is in conjuring hexes and spells, but the interviewer put down liberal arts.

She seems to have an astonishing ability to suppress pain as she stays completely calm during childbirth.

In the 1992 animated series, she was voiced by Nancy Linari.

In the Broadway musical, she was portrayed by Bebe Neuwirth with little difference from her other incarnations, although she seems sterner and smiles even less.

In the film, Morticia is on her wedding night to Gomez Addams. However, the ceremony is ruined by an angry mob of people who see the Addams family as freaks. In New Jersey, Morticia, alongside her husband Gomez and Thing find their "perfect" home in an abandoned asylum on a hill. They subsequently meet Lurch, an escaped mental patient whom they hit when Thing was distracted driving the car, and immediately recruit him as their butler.

Thirteen years later, Gomez and Morticia live in their cheerfully macabre home with their children, Wednesday and Pugsley. Morticia has their living tree Ichabod wake the children. During a family meal, Gomez and Morticia make preparations for the rest of their family’s arrival for Pugsley’s Mazurka. Wednesday questions what is beyond the gate, but Morticia isn’t keen on letting her daughter know what’s out there. Fester then crashes into the room after Morticia throws one of Puglsey’s explosives out the window.

When Wednesday comes home with a pink unicorn beret in her hair, this frightens Morticia greatly. She tries to handle the situation with her daughter, but makes the situation worse, when it becomes clear that she is unapproving of Wednesday’s choices as of late. Morticia consults her deceased mother and father, Bill and Mary, through a seance. They assure her that Wednesday is just exploring right now and will eventually come back to her senses. 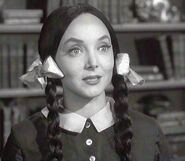 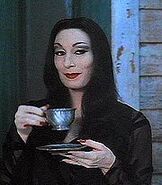 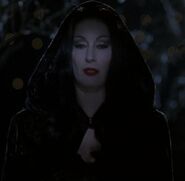 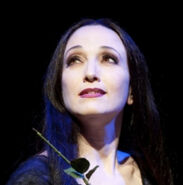 With Wednesday and the red balloon (2019 animated film) 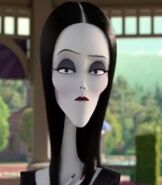