Princess Millicent von Schlepp (neé Addams) is a relative of The Addams Family. She is a snobbish, highly-demanding elderly woman that married a prince. He died after squandering the money on foolish investments, and left her in poverty, leaving only the title and a trunk full of worthless oil stocks. She's been living on her relatives ever since, like Morticia's Cousin Pretensia. She is Gomez's aunt, also known as Millie.

Princess Millicent von Schlepp, (who is actually Aunt Millie from Iowa) arrives for a visit in her sedan chair with two footmen. She's a snob, even though her husband squandered all her money but oil stocks. She has a literal handmaiden, Lady Fingers, a hand that Thing falls desperately in love with.

Millicent insists that they spruce up the place, and dress accordingly. Fester the Jester is not amused. They finally can take no more, and take her to a hotel. Oil is discovered on her property and she's rich again. Morticia is relieved that she's gone, and will give no more orders: "The Addams Family is a democracy again."

Thing is depressed, missing Lady Fingers. Gomez agrees to invite Millicent back. but Millicent has fired Lady Fingers and hired a new maid, Esmeralda, another disembodied hand. Thing goes missing, and Millicent discovers one of her bracelets has been stolen. She thinks Thing is guilty, but Gomez proves Esmeralda is the thief: Thing returns with Lady Fingers. The two are engaged. Millicent hires her back, and Thing promises to wait for Lady Fingers.

A snobbish and demanding woman, Millie is indifferent (or is in denial) about her poverty, pertaining her sense of royalty. Though not necessarily evil, she is disliked by the rest of the family for her less-than-pleasant attitude. She isn't quite like the other Addams family members despite being an Addams by blood, for she does not share the family's taste for dark decor (much to the shock of Gomez). 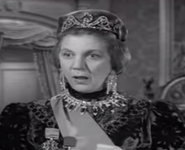 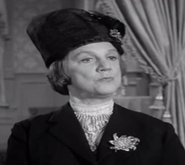 Add a photo to this gallery
Retrieved from "https://addamsfamily.fandom.com/wiki/Millicent_von_Schlepp?oldid=22253"
Community content is available under CC-BY-SA unless otherwise noted.