Lurch (first... or last... name is unknown) is the fictional manservant to The Addams Family created by cartoonist Charles Addams.

Lurch is a tall, shambling, lugubrious butler who somewhat resembles Frankenstein's monster and on film has a deep, resonant voice. In his first appearance in a cartoon by Charles Addams he had a black beard, but in later incarnations he was clean-shaven.

Although fully capable of normal speech, Lurch sometimes communicates via simple inarticulate moans, which, much like the dialogue of Cousin Itt, his employers have no trouble understanding. In fact, the Addamses often comment that Lurch is eloquent and vivacious.

Lurch helps around the house like any other butler, cleaning, repairing, helping the children on and off the school bus. Occasionally his great size and strength cause trouble. He clearly takes pride in his work and is willing to do even the most arduous task. Lurch has a profound loyalty to his employers; in turn, the family treats Lurch like one of their own.

The family summons him with an ever-present bell pull in the form of a hangman's noose. When pulled, it produces a loud gong noise that shakes the house, to which Lurch instantly responds with the line "You rang?" When the bell is rung, Lurch appears immediately in contrast to his slow demeanor, even if wide-angle shots reveal he was clearly nowhere in the vicinity before; on a few occasions, Lurch arrives even before the bell pull is tugged.

Lurch largely shares the family's macabre standards, although he occasionally looks askance at some of their activities. He has a similar attitude toward visitors, almost a sixth sense. When a plainclothes policeman visits, Lurch pats him down and removes something from inside his suit coat: his service revolver. Lurch groans at the affront of someone other than the Addams Family bringing a weapon into the house. Neise shows Lurch his badge, and Lurch hands the gun back to him.

Lurch is Wednesday's best friend, besides her beloved headless Marie Antoinette doll. He seems to have a paternal affection for both Wednesday and Pugsley. Although his job title is limited to butler, he seems to be a "jack of all trades" when it comes to the children, doing everything from taking them to school to making them lunch to even keeping an eye on them around the house. He is close friends with the disembodied hand, Thing.

Much of Lurch's history, including his first name and the nature of his relationship to any other Addamses, was originally unspecified. "Lurch" was revealed during the original TV series to be a surname, as there was a "Mother Lurch" who appeared in one episode. She addressed Lurch as "Sonny", which could either be a parental nickname or his actual first name.

It was stated in Addams Family Reunion that Lurch is part-Addams. This plays into his being a creation similar to Frankenstein's monster as he was made from different body parts. The only definite body part that is from an Addams is his heart. Lurch's mother appears to be a physically normal, elderly woman, although she does not see anything unusual about the Addams family or their home, with the exception of Thing.

In The New Addams Family, a woman asks Morticia about Lurch, "Where did you dig him up?" Morticia responds, "Funny, I can't remember which cemetery it was." Lurch is also described as having "two left feet."

In the episode "No Ifs, Ands Or Butlers" of the 1992 cartoon, Lurch's father was a hulking blue-skinned doctor like Lurch who had his son "put together", a reference to Dr. Frankenstein. Granny Frump also reveals that Lurch's ancestors were all Frankenstein's monster-esque beings as well, who were built in different periods with spare parts to boot, and even Abraham Lincoln was implied to have secretly been a part of the Lurch family.

In the 2019 film, Thing is distracted while driving Gomez and Morticia to their new home in an abandoned asylum on a hill. They hit Lurch, an escaped mental patient, and immediately recruit him as their butler. Thirteen years later, he is still employed to the Addams family. Grandmama has a crush on Lurch. During the attack on the Addams home by the citizens of Assimilation when the entire Addams family is trapped, Lurch leans over to protect the Addams family from the falling debris. This shows how much he cares for them. Fortunately, Wednesday arrives with Ichabod to rescue them.

In The Addams Family 2 Lurch accompanies the family on their cross-country vacation. He accompanies Wednesday when she goes in search of her supposed biological father. His great strength is demonstrated multiple times. 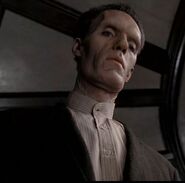 At his harpsichord (Carel Struycken)

In the conservatory (Carel Struycken) 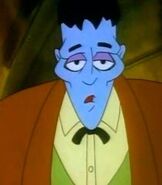 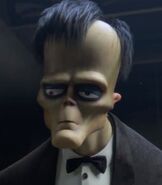