Kitty Kat is the family pet of Morticia Addams.

When Kitty Kat wanders through The Addams Family Mansion, he unwittingly frightens all of their visitors. Though obviously a male lion, Wednesday says "she" once ate a zookeeper and got a very upset stomach.[1] Without his drinking fountain he isn't his old playful self.[2] An apparently ailing Kitty Kat is examined by the doctor.[3]

The lion from the original series was raised and trained by animal handler Steve Martin (no relation to the comedian). Most of the lion's appearances were actually scenes from stock footage of the lion walking down the main stairs or growling into the camera.

In The New Addams Family, Kitty Kat is a female lion played by Shoshoni.[4] 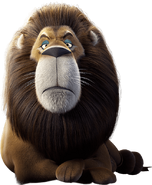 The Addams Family (2019)
Add a photo to this gallery

Retrieved from "https://addamsfamily.fandom.com/wiki/Kitty_Kat?oldid=23039"
Community content is available under CC-BY-SA unless otherwise noted.