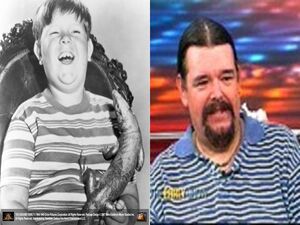 He is best known for playing Pugsley Addams on the original incarnation of The Addams Family television series.

After The Addams Family was canceled, Weatherwax found it difficult to get work in Hollywood (a common occurrence for child actors) and was typecast as Pugsley well into his teens. At seventeen, Weatherwax entered the US Army. He made appearances at various conventions throughout the rest of his life and continued to offer his services for acting jobs ranging from voice-overs to personal appearances up until his death.

Weatherwax died of a heart attack at his California home over the weekend of 6-7 December 2014, at age 59, with his body being found on Sunday.

Retrieved from "https://addamsfamily.fandom.com/wiki/Ken_Weatherwax?oldid=20803"
Community content is available under CC-BY-SA unless otherwise noted.