Not to be confused with Grandmama

Halloween with the New Addams Family (1977)

Granny Frump, or known by her first name(s), Hester or Griselda, is a relative of The Addams Family.

She is the mother of Morticia Addams and Ophelia Frump, mother-in-law to Gomez Addams and maternal grandmother of Pugsley Addams, Wednesday Addams and Pubert Addams.

Granny was the daughter of Grandpa Droop.[citation needed] She was also a witch, and at some point attended the same school, Swamptown High, as Grandmama did, where she was an awkward looking young girl with a head ribbon.

Her other classmate, Uncle Fester, shot the arrow (and the gun) that brought her and her husband together. She had two children: the cheerful, blonde-haired Ophelia Frump and the gloomy, black-haired Morticia Addams.

Morticia refused to go to school because of her anti-social tendencies, and so Granny had to teach her everything from Math, Science to Organic Poisoning and as a result, she aced her SATs and Post Mortems. However, Granny has a tendency to favor Ophelia over Morticia, and slightly neglects the latter or passively agrees to whatever she does despite the consequences. For instance, she didn't say no to Morticia when she wanted to go to work at the age of ten, played in the snow when she had pneumonia and wanted to run away from home.

Grandmama and Granny had decided to marry Gomez with Ophelia Frump, much to the former's horror. Granny was highly enthusiastic about the marriage, since she favored Ophelia over Morticia. She initially planned to marry Morticia to Vlad Addams, Gomez's player cousin, after she had married off her daughter Ophelia to Gomez. When Vlad choked on the toothpick, she focused solely on Ophelia and Gomez's marriage.

When the wedding was commenced after the funeral of Vlad, Cousin Itt, who had been introduced to Ophelia by Gomez and Fester before as a romantic distraction, stopped the wedding and Ophelia ran off with him. The minister says that he has to be paid whether the wedding goes on or not, to which Gomez replies that there will be a wedding. He proposes to Morticia and gets married. Granny asked Morticia if she really wanted to marry Gomez, and if she is prepared to face the nasty things that may come.

Around 13 years later, during her birthday, she dislikes the idea that she is getting older (and the fact that she thought she was going to be sent to a Home for the Aged, while Gomez and Morticia actually wanted to send her to a beauty farm). Fester thinks that's a good idea (sending her to a Home for the Aged), but reluctantly suggests that she should make herself too useful to be sent away. Granny tries hard, but she overdoes it and upsets Lurch by stealing his chores. Wednesday tries to cheer her up by suggesting she act young. Granny overdoes that, too, dressing and acting like a child. Gomez and Morticia think she's cracked up, and call in Dr. Jonley to examine her. Fester discovers the truth and explains to Granny - who then mistakes Jonley for the beautician and insists on being taken away. She enjoys the mental hospital for a while, but leaves when they won't give her a permanent.

Another 13 years later, she's found a 'Broom and Fly' recipe book and plans to fly on Halloween. Lady Fingers helps her brew it in the kitchen. She sulks in her bedroom when her cauldron blows up, leaving the kitchen for Grandmama to prepare for the Halloween feast. She blows it up again, and upsets Grandmama; "That's my kitchen, not an airport." She succeeds, but the broom's powers faded and she fell down into Lurch's net, who thought she was a pterodactyl.

In The Addams Family (TV Series), Hester was a brunette old woman (looking slightly younger than Grandmama) with a large nose and her hair tied into a neat bun. She dressed in various frumpy clothing (hence her last name, Frump) and would wear an occasional hat. Gomez and Morticia told the children that she's still beautiful now, but only in the inside (while showing them an x-ray of Hester's head). She was played by Margaret Hamilton, best known as Almira Gulch, the Wicked Witch of the West in 1939's The Wizard of Oz.

In Halloween with the New Addams Family, her appearance was quite similar to her 1964 counterpart. But this time, she wore an orange apron as she was brewing a 'Broom and Fly' spell so she could fly on Halloween.

In The Addams Family (1991), she looks more like the original series version of Grandmama, who is deceased.

In The New Addams Family, her appearance was turned 180 degrees. Griselda, as she was called by Grandmama, was a tall, blonde, middle-aged eccentric with awry, Marlene Dietrich-like hair and dressed in a variety of lumpy knee-length dresses adorned with fur and feather trim.

In The Addams Family (TV Series), Hester was a brash, stern-looking woman that commented on everything. She showed quite a negligence towards Morticia and favored her older sister Ophelia. She was shown to be quite friendly with Grandmama, her high school friend, during the preparation days of Gomez and Ophelia's arranged marriage, but in later years, Grandmama couldn't stand her, especially when she was brewing potions in her kitchen.

In The Addams Family (1991), she appeared as a loving (but quite comically insane) maternal grandmother to the Addams children. She loves to play tricks and guide the family with her knowledge and wisdom. She was played by Judith Malina.

In the Addams Family Values, she still appears as a comically insane old woman. She guides the family when there's trouble, such as when Pubert turned into a "normal" child. Played by actress Carol Kane.

In the 1998 movie Addams Family Reunion, when the Addams family are invited to a family reunion (which went horribly wrong), she stayed in the mansion with Cousin Itt, playing cards. She lets in the Adams family to stay while the rain clears outside. She also appears as a magic-loving witch. She was mentioned here as "Esmeralda Frump". Played by actress Alice Ghostley.

In The New Addams Family, she gained a much more outgoing and colorful personality, though her brashness remains. What was a prudish, old fashioned frump turned into an eccentric lady with a penchant for significantly odder things that her 1964 counterpart showed no liking in the least bit. She had a terrifying laughter that echoed throughout the house, and was shown to have at least parts of both of Morticia's and Ophelia's personalities, eccentric yet particularly normal.

Granny as a teenager

Her beauty is on the inside.

Grandmama with her grandchildren 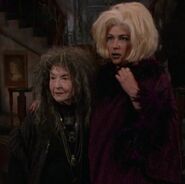