View source
watch 01:54
Obi-Wan Finale - The Loop
Do you like this video?
Play Sound

Not to be confused with her mother in-law, Great Grandmama Addams, or with Granny Frump

Halloween with the New Addams Family (1977)

Grandmama (or Eudora Addams[1]) is a fictional character in the Addams Family, created by Charles Addams for The New Yorker magazine.

Grandmama is known for her cynical and morbid sense of humor and her recreational interest in the occult. She is a witch, who dwells in potion-making, spells, hexes, and even fortune-telling. She is probably best recognized by her frizzy grey hair and her shawl.

She also loves wrestling with alligators.

In the 1960's sitcom, Grandmama is partially French descent; Her Great-Great Grandmother Slice was 'the Belle of the French Revolution," and sometimes she tells tales and stories to her grandchildren about this era (which resulted in Pugsley helping to decapitate Wednesday's doll). However, Grandmama was born in Spain, which she later refers to as "the old country". She lived in Spain at least until Gomez was six, when Gomez was promised in marriage to a family friend's daughter, although both Gomez and Grandmama had forgotten this by the 60's.

Little else is known of Grandmama's past save that she first voted in 1906. When Fester pointed out that there was no women's suffrage in 1906 (implying Grandmama lived in the U.S. at the time), she cryptically declared "That didn't stop me!". Grandpapa Addams said that she went to Law School.

Grandmama had lots of names and nicknames, such as Granny, Grandma Addams, Eudora Addams and aliases such as Madame Bovary, Madame de Pompadour and Madame X (which led her to the arrest of a fraud).

In the 1964-1966 TV series, Grandmama is the mother of Gomez, though her name is never mentioned or revealed. She is sometimes seen with Uncle Fester, playing darts or torturing each other. She has frizzy white hair, wears a red shawl on all occasions, a black bombazine skirt, thick socks and fleece slippers. The only difference from her original portrayal is her dark complexion, which seems to only appear in the drawings. She was played by actress Blossom Rock.

In the 1977 Halloween special, Blossom Rock, who played her in the first series, was very ill, and was replaced by Phyllis actress Jane Rose. She is portrayed as a temperamental old woman who cooks in the kitchen with Morticia's mother Hester Frump (who was also a witch) for the Halloween party. She hates it when Hester uses the kitchen to test her flying broom.

In the 1991 feature film, Grandmama is deceased and her tombstone is seen in the family cemetery. Instead, Granny Frump lives with the family.

In the 1998 series The New Addams Family, Grandmama came back as the mother of Gomez, and now, Uncle Fester is her son. She is, like her past portrayals, a witch, seen making potions and such and joins in the mayhem making of the Addams Family. Played by Canadian actress Betty Phillips.

In The Addams Family: A New Musical, music and lyrics by Andrew Lippa, book by Marshall Brickman and Rick Elice (2010-11), both Morticia and Gomez admit that they thought Grandma was the mother of the other. This confusion leads to Grandma admitting that she can’t remember whose mother she actually is. Played on Broadway (2010-11) by Jackie Hoffman.

In the 2019 film, when Gomez and Morticia's wedding is interrupted by angry townsfolk, Grandmama buys Uncle Fester time to evacuate Gomez, Morticia, and Thing, while she fights some of them off. In present day, she arrives a week before Pugsley's Mazurka to help her daughter-in-law with the preparations for the event. She quickly becomes worried about her granddaughter Wednesday and offers to talk to her, but Morticia insists she handle it herself. She also has a crush on Lurch. Once the party is in full swing she and her sister Sloom get into an argument. 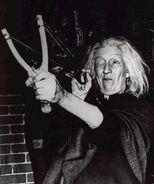 Grandmama with a slingshot 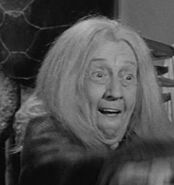 With Wednesday in "Feud in the Addams Family"

Jackie Hoffman as Grandma Addams in the Addams Family Musical 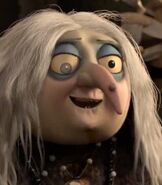