Gomez Addams is the patriarch of The Addams Family. He was created by cartoonist Charles Addams for The New Yorker magazine in the 1930s.

As with all of the members of the family, in the original cartoons he had no name. When the 1964 television series The Addams Family was being developed, Charles Addams suggested naming the character either Repelli or Gomez. Addams left the final choice up to actor John Astin, who chose Gomez.

In the original cartoons by Charles Addams, his appearance was somewhat grotesque, being tubby, snub-nosed, and having a crooked tooth and a receding chin. Gomez is of Castilian extraction, and almost always dresses in a chalk-striped, dark-colored suit and tie (bow tie in films), sports slicked-back hair and a pencil-thin mustache. Though head of the household, he is extremely naive and childish, with a short attention span and endless optimism. Gomez is passionately in love with his wife Morticia; he affectionately calls her romantic names like Querida ("darling") and Cara Mia ("my beloved"), and is driven wild by the slightest of her actions, whether imitating animal noises or speaking French. Like the rest of the family, Gomez is open and friendly to outsiders, though he finds their "normal" lifestyles befuddling.

He enjoys cigars and has been smoking them ever since he was five years old (mother insisted), and is an accomplished juggler and knife-thrower. His favorite dance is The Freddy. He has a childlike love for toys and is especially fond of setting up trainwrecks with his model trains. He is well-versed in all types of combat (or believes himself to be, at any rate), especially swordfighting. He is athletic, enjoys the trampoline, and has the heart of a 20-year-old track star -- Mama performed the surgery herself.

Gomez's investments are guided more by whimsy than strategy, yet luck rarely fails him. "It's not for nothing that they call me 'The Plunger'," he once boasted, an apparent reference to sticking doggedly with a stock despite low fluctuations, although this nickname was in fact bestowed upon him not by Wall Street investors but by the Plumbers' Union. He owns businesses around the world, including a crocodile farm ("Crocodiles Unlimited"), a buzzard farm, a salt mine, a tombstone factory, a uranium mine, and many others. It is not unheard of for him to simply forget that he owns a controlling interest in a business or to draw a check on the wrong bank. Guinness World Records 2008 ranked him as 5th richest TV character with a net worth of $8.2 billion.

As a young man, Gomez was a perennially sickly youth, gaining perfect health only after meeting Morticia.[1] He nevertheless studied law and was voted "Most Likely Never to Pass the Bar". It is noted that, while Gomez has never won a case, he has never lost one either ("Perfect record!" boasts Grandmama).[2] Although he rarely practices, he boasts of having put many criminals behind bars while acting as their defense attorney.

He has strange and unusual mindset of how to woo a lady. He once mentored Pugsley on how to attract a lady the Addams ways that included three steps: raising an eyebrow, giving a smile and throwing a live wolverine at the lady.

Gomez was played by John Astin in the 1960s American television series.

Astin also voiced the character in an episode of The New Scooby-Doo Movies which featured the family.

In the first animated series by Hanna-Barbera, Gomez was voiced by Lennie Weinrib.

Gomez was played by the late Raúl Juliá in The Addams Family and Addams Family Values. The film version of Gomez shares the fun-loving personality of his sitcom counterpart, including his affinity for swordfighting and trainwrecks. However, Gomez is noticeably calmer and more suave in the films than his television counterparts, and even speaks with an English-like accent (as Juliá was from Puerto Rico). Gomez also regularly plays chess with Thing, and enjoys hitting golf balls from the roof of his house, enraging his next-door neighbor, who has to contend with the balls smashing his windows. When the Alfords throw them out of their own home, Gomez gets so depressed that he spends all day watching daytime TV.

Unlike the original television show where Fester was Morticia's uncle, here Fester is his long-lost brother. The first film notes their parents were murdered by an angry mob, but in the sequel, when Gomez catches Fester with a pornographic magazine, they both look at the centerfold and fondly say "Mom." This Gomez passed his facial-hair genes to his son Pubert, a seemingly indestructible baby with a thin, black mustache like his father.

In the second animated series, also by Hanna-Barbera, Gomez's voice was again performed by John Astin.

Glenn Taranto portrayed Gomez in The New Addams Family. This incarnation was quite reminiscent of John Astin's version.

Nathan Lane originated the role of Gomez in The Addams Family: A New Musical on Broadway in 2010.

In the 2019 film, Gomez and Morticia Addams are chased away with the rest of the Addams clan during their wedding ceremony by an angry mob that disapproves of their macabre nature. As Gomez tries to lead them away to safety, the aforementioned mob burns a bridge that they were trying to use as an escape. Not so easily defeated, Gomez teams up with his brother Fester and their mother, Grandmama, to fight off the mob before escaping. Gomez and Morticia lament that other people will not accept them, so they decide to move away to somewhere so horrible that nobody else would be caught dead in, which turns out to be New Jersey.

Gomez and Morticia make their way into the new state along with the disembodied hand Thing, but they hit something on the road. It turns out to be a large man from an insane asylum, Lurch. Gomez and Morticia spot the asylum on top of a hill and make their way up to find it abandoned and in a state of decay and squalor, along with a booming voice ordering them to "GET OUT!" The couple decides that the asylum is perfect for their home.

Gomez and Fester try to help Pugsley prepare for his Mazurka by utilizing swordplay, which is how both brothers passed their Mazurkas. Pugsley turns out to not be very good at it, and he is discouraged by Gomez’s obvious lack of confidence in his skills. Seeing the disappointment in his son’s eyes, Gomez realizes he was wrong and that he should have let Pugsley handle it his own way, with his explosives; he then admits to Pugsley that he let Pugsley down, and that he’d been so focused on doing things the traditional way that he forgot to let Pugsley be who he was.

After an attack on the house by Margaux Needler, Gomez asks Pugsley what the true meaning of the Mazurka is, and Pugsley says that it’s about protecting their family from those who would do them harm; Gomez smiles and says “Go ahead — show ’em what you’re good at” before tossing an explosive to Pugsley, who smiles and destroys the rocks with his explosives.

In The Addams Family 2, Gomez and Morticia notice that their children seem to be ignoring them, Gomez decides on a family-bonding vacation in an old-looking camper with a licenses plate reading TLK2THEhand. 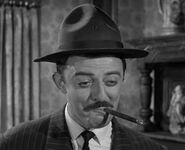 In "Gomez, the Politician" (John Astin)

Gomez and his trains (Raul Julia)

Gomez and Morticia welcoming Cousin Itt in the 2019 animated film 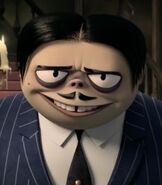