Finn got his start in Stranger Things as Mike Wheeler. The show has run three seasons and is set to film Season 4 this upcoming January. He one older brother named Nick Wolfhard.

Finn has also been in some other popular films:

He voiced Pugsley Addams in The Addams Family (2019). 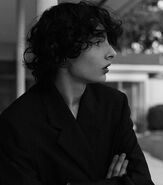 Add a photo to this gallery
Retrieved from "https://addamsfamily.fandom.com/wiki/Finn_Wolfhard?oldid=22976"
Community content is available under CC-BY-SA unless otherwise noted.