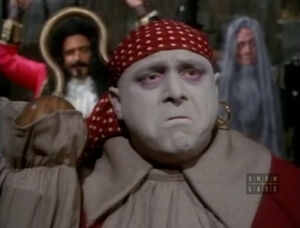 He was the brother of Long John Addams, who wrote about their exploits together. He wore a hook on his right arm because his hand was severed by the Governor. The hand, however, lived on, was called Pinky, and is presumably the ancestor of Thing.

Curly was played by Michael Roberds.

Retrieved from "https://addamsfamily.fandom.com/wiki/Curly_Addams?oldid=19253"
Community content is available under CC-BY-SA unless otherwise noted.