Cousin Itt is a relative of The Addams Family in the original television series and beyond. Unlike the other main characters, he was not created by cartoonist Charles Addams, but by a producer of the show.

Cousin Itt's entire body is covered with hair. Although he sometimes wore opera gloves, it is unclear what, if anything, is beneath the hair. When Gomez asked him what is underneath all the hair, Itt replied "Roots".[2]

People outside the Addams family normally can't understand him, although, in one episode of the sitcom, Morticia and Gomez taught Cousin Itt to speak in an understandable voice.[3] He has an extremely high IQ of over 300, guessed every Rorschach Test correctly, and placed all of the pegs in the correct slots.

Cousin Itt did not live in The Addams Family Mansion with the main characters, but did have his own bedroom in the attic. When he visited, he liked to spend time in the chimney.

Cousin Itt drove a three-wheeled car: a Messerschmitt KR175.[4] He was quite the playboy, even romancing Morticia's sister Ophelia Frump. He later fell in love with Margaret Alford and married her after her husband, Tully, was disposed of by the Addams children.[5] He and Margaret have a child named "What" (from the obstetrician's reaction).[6]

In the first animated series from Hanna-Barbera, Itt's voice was provided by John Stephenson.

In the second animated series from Hanna-Barbera, Itt's voice was done by Pat Fraley. In this series, Itt worked for the US Government as a powerful super-spy known as "Agent Double-O Itt". Itt was also the leader of a gang of bikers called the "Haircurlers".

In the 2019 film, Cousin Itt is the first of the rest of the extended Addams clan to arrive for Pugsley's Caber Mazurka. He's voiced by Snoop Dogg.

In the 2021 film, Itt tells Wednesday about one time he cut his hair in high school, and even shows her his face. Later he sings at a party.

In The Addams Family: A New Musical, Cousin Itt appears briefly, shortly after intermission, and just before the start of Act II, dancing with Tassel, speaking in a series of "me"'s and "mew"'s. 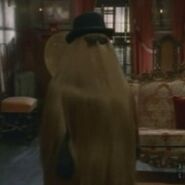 on a Pago Pago postage stamp[7] 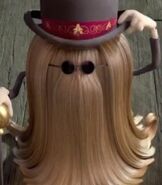