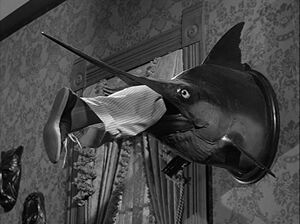 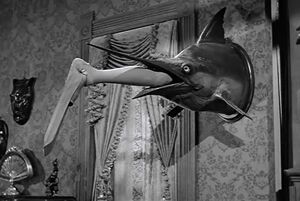 Cousin Farouk is a relative of The Addams Family.

He was nearly consumed by a swordfish while trying to catch a rare eel. The remains of both Farouk, and the fish are mounted on the living room wall in The Addams Family Mansion. Sometimes Farouk's leg is dressed in a pant leg and boat shoe, other times it wears only a flipper.

(In The New Addams Family, the swordfish head is replaced by a full shark.)

Morticia once offered to give him to the newlywed neighbors as a housewarming gift.[1] He liked to meet new people.[2]

Uncle Fester identified a seemingly identical leg, wearing a swim fin, mounted in a swordfish head, hanging in Farouk's spot on the Living Room Wall, as Cousin Squint when his pen-pal Madelyn asked about it.[3] Gomez identifies a similar leg in a darker swordfish as Cousin Ahab.[4]

When Lurch becomes a pop star and looks out the window at his clamoring fans, Farouk is missing, though the holes in the wall where he was mounted are visible.[5] He returns around the time the Fireman's Pole is installed nearby.[6]

Though seen on the wall as mere decoration in many episodes, Farouk is noticed and causes reactions in these The Addams Family original series episodes: