Cindy Henderson (27 December 1954 - 13 April 2010) is an American actress. She had roles in such classic television shows as Mannix, Bewitched, The Odd Couple, The Partridge Family, and The Brady Bunch.

She voiced Wednesday in the "Wednesday Is Missing" episode of The New Scooby-Doo Movies, and continued the role in the 1973 animated version of The Addams Family. 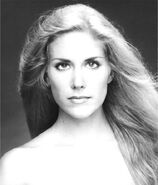 Add a photo to this gallery
Retrieved from "https://addamsfamily.fandom.com/wiki/Cindy_Henderson?oldid=21975"
Community content is available under CC-BY-SA unless otherwise noted.