Addams Family Wiki
Register
Don't have an account?
Sign In
Advertisement
in: Real People, Actors, Performers, A to Z Index 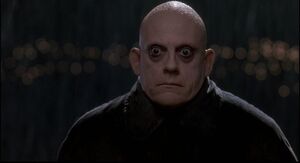 Christopher Allen Lloyd (born 22 October 1938) is an American actor. He is best known for his roles as Reverend Jim on Taxi and Doc Brown in the Back to the Future movies.