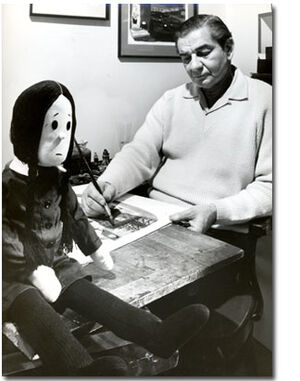 He is, of course, the creator of The Addams Family.

Charles, or "Chas" as his friends called him, was born 7 January 1912 in Westfield, New Jersey. Records show at the time of his birth the Addams' lived on Summit Avenue. They moved several times before taking up permanent residence in 1920 on Elm Street and stayed there until 1947. He attended public school in Westfield and was fond of visiting the Presbyterian cemetery on Mountain Avenue. When he was a youngster, he was caught by the police for breaking into a house on Dudley Avenue. On the second floor of the garage behind the main house there is a chalk drawing of a skeleton that is believed to have been drawn by Charles Addams. That house on Dudley and one on Elm Street is said to be the inspiration for the famous Addams Family house.

At Westfield High School, Charles became the art editor for the Weather Vane and drew many cartoons. He graduated in 1929 and attended Colgate University for one year. He switched to the University of Pennsylvania and then studied at Grand Central School of Art in New York City.

Charles Addams began as a cartoonist in the The New Yorker with a sketch of a window washer that ran on February 6, 1932.[1] His cartoons ran regularly in the magazine from 1938, when he drew the first instance of what came to be called the Addams Family.[1] In 1940, he submitted "Downhill Skier," and that got him an offer to come on board full time for New York's premier literary magazine. He continued there until his death in 1988, drawing over 1,300 cartoons.

In 1946, Addams met science-fiction writer Ray Bradbury after having drawn an illustration for Bradbury's short story "Homecoming" in Mademoiselle magazine, the first in a series of tales chronicling a family of Illinois vampires, the Elliotts. The pair became friends and planned to collaborate on a book of the Elliott Family's complete history, with Bradbury writing and Addams providing the illustrations; but it never materialized. Bradbury's Elliott Family stories were anthologized in From the Dust Returned (2001), with a connecting narrative and an explanation of his work with Addams and Addams's 1946 Mademoiselle illustration used for the book's cover jacket. Although Addams' own characters were well established by the time of their initial encounter, in a 2001 interview Bradbury states that Addams "went his way and created the Addams Family and I went my own way and created my family in this book."[2]

Retrieved from "https://addamsfamily.fandom.com/wiki/Charles_Addams?oldid=20466"
Community content is available under CC-BY-SA unless otherwise noted.