She was a vaudeville performer and film actress before finding her greatest fame on television. Her younger sister was actress and singer Jeanette MacDonald.

She played Grandmama on the original Addams Family TV series. 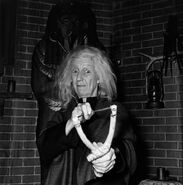 Add a photo to this gallery
Retrieved from "https://addamsfamily.fandom.com/wiki/Blossom_Rock?oldid=23071"
Community content is available under CC-BY-SA unless otherwise noted.