Addams Family Wiki
Register
Don't have an account?
Sign In
Advertisement
in: Characters, Female Characters, A to Z Index

She is a spoiled, rich girl who attended Camp Chippewa with Wednesday and Pugsley Addams. She is the daughter of Don and Ellen Buckman.

She has blonde hair and is very pretty, though she wore headgear to bed (which is later taken by outcast Joel Glicker). She displays the traits of a "snob" and a "spoiled brat." According to her father, Amanda couldn't wait to attend Camp Chippewa. It was "all she talked about." Upon meeting Wednesday wearing a black dress, she asked, "Why are you dressed like somebody died?"

At a "Life-saving lesson", Amanda said that she was going to be an actress. When she volunteered to be the ("drowning") victim, Wednesday remarked "All your life". She is a snob, arrogant and selfish, despising the Addams children and the other outcasts.

In the film, Amanda is the popular girl who joins Wednesday and Pugsley at Camp Chippewa. She and Wednesday heavily contrast each other which causes them to conflict. During the "life-saving lesson", they verbally mocked each other before Amanda, as the "victim", jumped into the water and cried for help. Wednesday claims that she can’t swim, which causes Amanda to nearly drown.

Amanda was present when the outcasts emerged from the Harmony Hut, and spoke out with a fearful expression that Wednesday's perky smile scared her. During the Thanksgiving-inspired play, Amanda is taken captive by the rebelling campers. She is tied to a wooden pole and has an apple stuffed in her mouth like a gag to muffle her cries, while several campers pile logs around her and soak them with gasoline. Her screams become even louder as Wednesday calmly pulls out a set of matches before her eyes, intending to roast Amanda alive.

Following Wednesday and Pugsley's return home, Amanda is later seen - alongside her parents - in a plane, all with grumpy, worn-out expressions. They would, to their discomfort, spot baby Pubert Addams happily greet them after being flung into the air then falling back down.

Her friends are known to be: Melissa, Michelle, Lilly, Jennifer, and Tiffany. 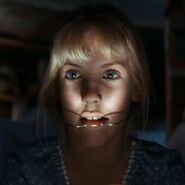 Amanda dressed as a pilgrim

Amanda being tied up