Abigail Craven or "Dr. Greta Pinder-Schloss" is a con artist and loan shark.

She discovered Uncle Fester, suffering from amnesia, in the Bermuda Triangle. She re-named him Gordon and took him in as her son. When the Addams' lawyer Tully Alford was tortured by Gordon for the money he owed Abigail, recognized that Gordon bore a strong resemblance to Uncle Fester he devised a plot in which Gordon would infiltrate the family in order to steal the Addams fortune.

While searching for Gordon after he goes to the kids' recital, she is captured, entangled, and bound by the living plants near the greenhouse. She is discovered in the morning by Lurch, completely cocooned in the vines, in which she calls Lurch "Bigfoot" and tells him, "Don't stare, just get me out."

When Uncle Fester unleashes a hurricane in the Addams mansion's library, she and Tully are thrown out a window, landing in two open caskets in the Addams cemetery, which Wednesday and Pugsley then presumably bury... with the villains still alive inside. ("Are they dead?" "Does it matter?)

She is a sophisticated and corrupt woman who pretends to be a doctor who has been working with Fester for years, claiming she did several tests with his fascinating mind. She also tricked the Addamses by telling Gomez and Morticia that Fester's unusual behavior is due to a displacement, a theory that Fester has double feelings for the Addamses, hatred and love, and that they shouldn't interfere. When Tully made a partnership with Judge Womack, they seized the Addams house and prohibited them to enter. Then Abigail could use Fester to reach the vault. She tricked Fester as Gordon by making him trust her and obey all her orders.

Abigail is old, with brown hair and blue eyes. She also ordered Tully to seize Morticia in a torture wheel, with strings stretching her arms and when Gomez saved her, she pulled a gun and ordered them to collect all the treasure for them in the vault, or she would finish Morticia. Abigail is stern and rude with Gordon then, turning him against her. 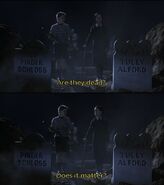